posted by Michael Greenfield | 107sc
October 13, 2014
Tweet
I recently ran a survey of housing attitudes among people living in Palo Alto.  It yielded some interesting results.

I ran this survey to satisfy my own curiosity: I wanted to get real data on Palo Altans' attitudes towards housing.  Housing and zoning has been a politically fraught issue in recent years, but (as far as I know), there's been very little actual data on people's attitudes.

I advertised on Facebook from October 8-11.  The ad that people clicked on to get to the survey looked like this: 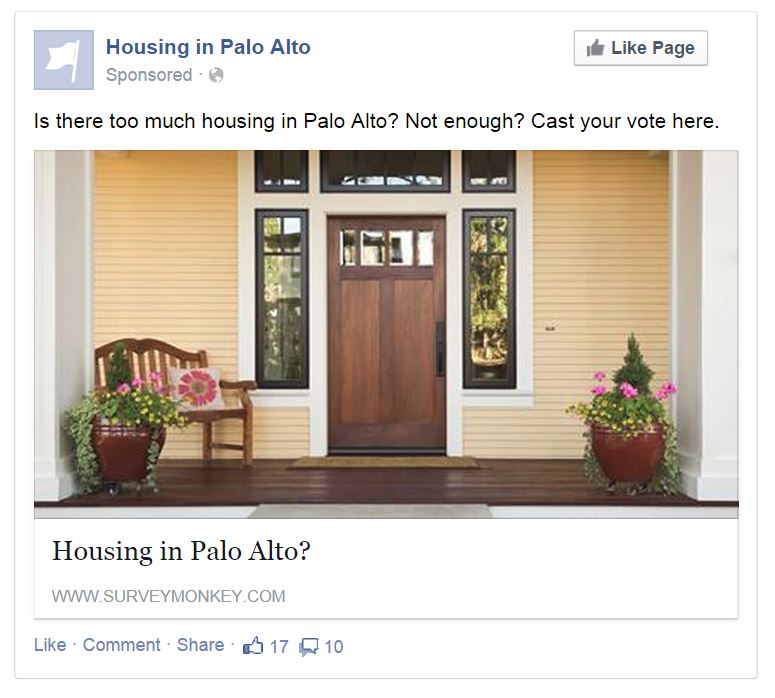 As far as I know, only people who saw the Facebook ad took the survey.  I didn't take the survey myself, nor did I circulate the URL or tell anyone about the survey, in order to ensure results as unbiased as possible.
The ad targeted everyone in Palo Alto aged 18 and up.  When someone clicked on the ad, they were taken to a SurveyMonkey survey where they were asked whether or not they were a Palo Alto resident.  135 people answered that question, of whom 109 said they were Palo Alto residents.  As far as I know, none of the 109 residents who qualified for the survey have any association with Palo Alto Forward.

I, Mike Greenfield, did this survey for my own fun and informational purposes.  I'm a Palo Alto resident; I live downtown with my family.  My background is in data analysis -- I majored in Mathematical and Computational Science at Stanford and was the first data scientist at PayPal and LinkedIn -- so I enjoy this sort of thing :)

This was a short survey, with only two substantive questions (the first question qualified answerers as Palo Alto residents, the second and third were substantive, and the fourth was a prompt to enter an email address to get results of the survey).
The first question was "Do you think that Palo Alto needs more housing than it currently has?" 92 people answered, and their responses were:

In short, answers were relatively evenly divided.  Still, almost 70% said that Palo Alto needs more housing, and just under half said that the high cost of housing reflects a major housing shortage.

The second question was "Which of the following is Palo Alto's biggest problem?"  86 people answered, and their responses were:

Clearly, the price of housing stands out as the biggest problem for those who took the survey, as nearly two thirds of respondents cited high housing prices as the biggest issue for Palo Alto.

Like any survey, this survey is not perfect.  Here's how:
-- It only surveys Facebook users.  The vast majority of Palo Altans use Facebook, but there are some that don't.
-- It only surveyed those who clicked on a sponsored post about housing.  That group is no doubt a bit different than the average population, for a variety of reasons.
-- It's a small audience; the traditional margin of error number is +/- 10%.  So it's a very safe bet that the high price of housing is the #1 issue among those mentioned, and a fairly safe bet that the largest group of people believe that there is a major housing shortage.  But there's not enough data to distinguish between most of the other answers.
-- I modified the survey very slightly after 10-15 people had taken it: I added an "other" field to the biggest problem question.  At around the same time, I also started prompting respondents for email addresses at the end of the survey.

With those disclaimers made, I believe that this survey is better than anything else out there.

My hope is that it will both inform policy and be an example of gathering good data for others to emulate going forward.