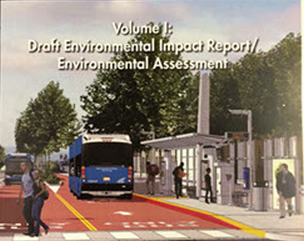 The VTA Bus Rapid Transit project would make the El Camino bus time-competitive with driving, including in Palo Alto.

For the El Camino route as a whole, San Jose to Palo Alto, people using the bus would travel over 30 minutes faster, and a driving trip would be 3-4 minutes slower.  But, almost nobody travels on ECR from Palo Alto all the way to San Jose - most trips are 5-7 miles long, whether driving or taking the bus.

The proposed project has two main options – so-called mixed flow,which would have upgraded bus stops that allow people to pay before boarding, and dedicated lane, which would use a lane of El Camino exclusively for bus use.  If none of these changes were made (the so called no build alternative), VTA would still increase bus frequency from every 13 minutes to every 10 minutes.

For a more typical example – to travel from downtown Palo Alto to the San Antonio area in Mountain View, without any bus service changes, driving will take ~10 minutes and the express bus will take 22 minutes in 2018.  The mixed flow version saves only 1 minute in bus travel time.  With the dedicated lane version, the bus will take 10 minutes and driving will take 11 minutes.  So, at the cost of 1 minute in drive time, we get bus service that is time-competitive with driving!

Making the bus time-competitive with driving is *the* factor that attracts choice riders and causes ridership to increase.  When Caltrain introduced the Baby Bullet service, that’s when ridership spiked, increasing well over double in the following decade.   Recent BRT projects in Eugene, Oregon, Cleveland, and Los Angeles show that projects that made the bus much more time-competitive with driving exceeded their ridership projections.

El Camino BRT would be complementary with Caltrain.  Stops are closer together:  BRT will make 15 stops on El Camino Real and the Alameda, providing access to more destinations.  Caltrain electrification will enable more frequent service – potentially a BART-like 20 minute schedule. BRT service will still be more frequent, coming every 10 minutes.

Yes, some intersections would be worse for drivers with dedicated lanes.  Out of the 1 minute longer drive time, 20 seconds would be extra delay at Oregon and Page Mill. The dedicated lane version would divert some trips away from El Camino Real and add traffic to some side street intersections, but those impacts can be mitigated according to the EIR.  For example, Alma and Meadow would get 2 seconds slower, and by 2040 it would be 15 seconds slower.  Is that tradeoff worth creating a bus route that is 10 minutes faster, and time-competitive with driving?

At the City Council meeting, Councilmembers Scharff and Burt expressed skepticism about the plan.  Sharff was surprised that the VTA’s environmental impact report included a version with dedicated lanes all the way through to Palo Alto, although the Palo Alto City Council had opposed that option earlier.   Council Member Burt expressed a preference for using the VTA EcoPass bulk discount program to increase the use of the existing express bus service, rather than supporting making the service faster.   Councilmember Berman acknowledged community concerns and expressed an interest in reviewing the information in the environmental report. Chief Transportation Official Jaime Rodriguez mentioned concern about the impacts on side street intersections, such as Alma and Charleston.

During public comment, one community member expressed concern that there would be little ridership in Palo Alto because bus riders are lower income on average, while another community member described her family’s frequent bus use while living in Vancouver, where bus service was more convenient.

No council members drew connections between the potential relationship between time-competitive bus service, and the city’s transportation demand management initiative to reduce traffic and parking demand, although a recent downtown intercept survey showed that about 10% of respondents used public buses, with 4% reporting VTA and 6% reporting SamTrans.

As a next step, staff will analyze the proposal and present a letter for Council to weigh in.