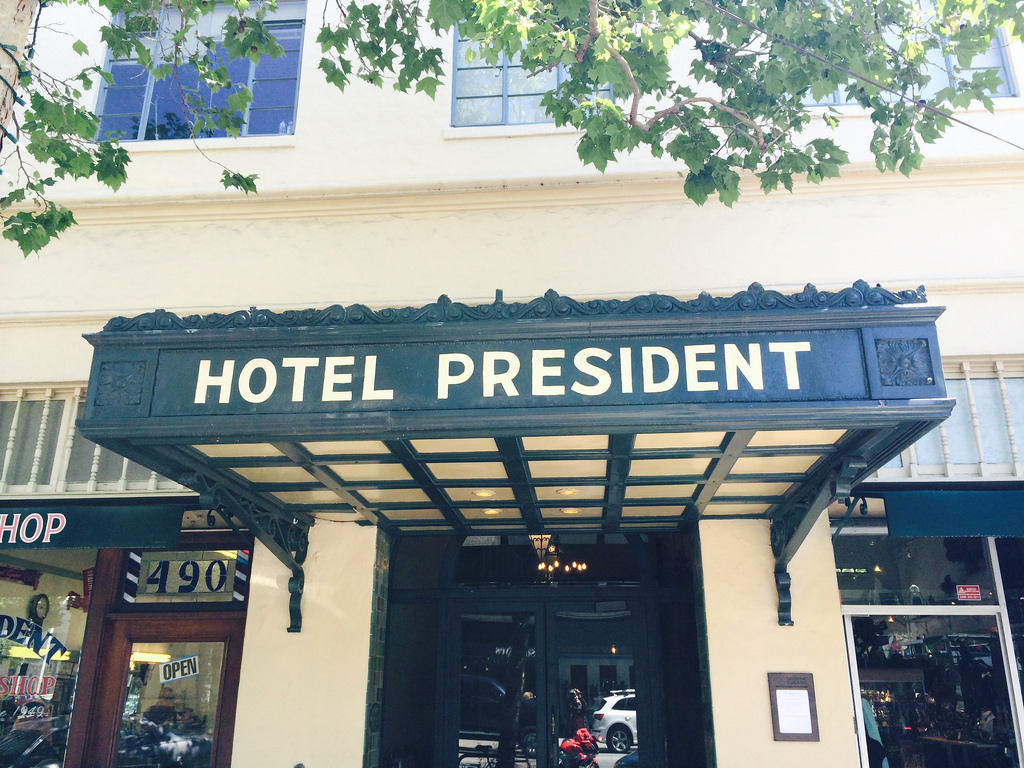 The Hotel President Apartments, built in 1929, is one of the only buildings in Palo Alto to offer studio apartments.

According to an article in the Palo Alto Weekly, neighborhood hostels have begun to appear in Palo Alto, in the form of single-family homes where the rent is split between many students or recent graduates. While it's long been common for students and young workers to split a lease on a house, what's new is how many tenants are required to pay the rent: in some cases, the homes are being filled with bunk beds and the rent split between as many as 16 people at one time!

It's easy to see why landlords would like to rent to so many people for so much money. But why don't students and young workers have better options? Surprisingly, it's because Palo Alto's zoning code has strongly discouraged buildings with housing units appropriate for single people, such as studios or one-bedroom apartments, leaving single tenants little option other than sharing a larger space with one or more roommates.

Palo Alto’s zoning code controls both the size of each building and the number of housing units allowed. Even in the densest zoning designation, RM-30, each unit must average 871 sq ft - the size of a typical two-bedroom apartment - or the building will forfeit some of its buildable square footage. In a housing market as tight as Palo Alto’s, these large units become luxury condos and apartments too expensive for anyone but the very wealthy.

There are studio apartments in Palo Alto, but they are overwhelmingly in older buildings such as the President Hotel that were built before zoning codes were made more restrictive in the 1970s and 1980s. More recent buildings with smaller units were allowed only because of zoning exemptions, such as those part of the South of Forest Area (SOFA) Plan.

After decades of discouraging smaller units, Palo Alto faces a dramatic shortage of housing that is appropriate for singles even as demand from young singles and older empty nesters has grown. As a consequence, it has become profitable for homeowners to rent out their homes to large groups of tenants who would have been able to afford their own rooms in earlier decades, rather than cramming themselves into bunk beds to afford the rent. Note that fair housing laws prevent cities from regulating how many people live in a household, making this practice hard for cities to regulate.

The solution is simple: instead of discouraging studio apartments and other types of housing that are naturally affordable for single people, Palo Alto should encourage them.